The 1st Couch Stories Show: March 2012 at the Suter Art Gallery Theatre
Theme of the Night: Parents and Parenting 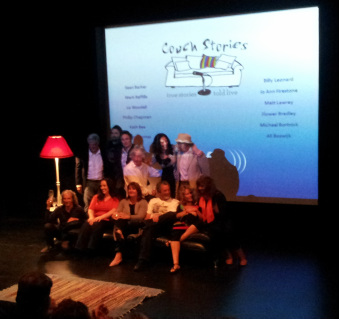 The first Couch Stories show at the Suter Theatre exceeded our (admittedly modest) expectations: a sell-out crowd and great stories, and a real buzz in the foyer afterwards.

The theme of the night was parents and parenting and a dozen well-known locals told hilarious, moving and often non-PC tales about their Mums and Dad's or about themselves as parents. From what we hear, the talk and exchange of stories went on long after the show ended.

THANKS TO:
Storytellers Matt Lawrey, Ali Boswijk, Simon Thomas, Kath Bee, Flower Bradley, Philip Chapman, Liz Woodall, Sean Barker, Mark Raffills, Billy Leonard, Michael Bortnick, Jo Firestone.
AND:
Volunteer technical and front of house staff  & Graeme's Trading for the Couch
The show was a fundraiser for Fresh FM and and resulted in a contribution of just over $1,000 to the station’s operational fund.